Obalon® Intragastric Balloon System is a swallowable, 3-balloon system to help obese individuals lose weight. Obalon is the first and only swallowable balloon in the market and is approved by FDA. As with other gastric balloon options, Obalon is a non-surgical procedure. 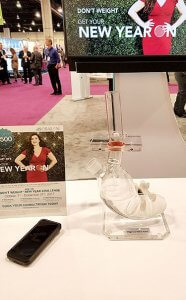 The older generations of Obalon were to be removed 3 months after the first balloon placement, but the new generation is designed to stay in the stomach for up to 6 months. The longer therapy cycle results in more weight loss and better success in maintaining it long term. It is worth noting that previous generations of Obalon were not FDA-approved and were available outside of the U.S., such as Mexico. The new generation is FDA-approved and is only available in the U.S.

How Does it Work?

A deflated capsule (size of a vitamin pill) is swallowed by mouth. Once the physician confirms that the capsule is safely in the stomach, it is inflated with gas, and the catheter is detached.

Unlike the traditional gastric balloon, there is no need for endoscopy and no need for sedation. However, the extraction of the balloon system needs to be done endoscopically. Each balloon has a volume of 250cc and the placement of each balloon takes about 10 minutes.

To help patients overcome weight loss plateaus, a second balloon and a third balloon are swallowed in 4 weeks and 12 weeks after the first one, respectively. As was mentioned earlier, the Obalon Generation 3 balloon system is left in the stomach for 6 months rather than 3 months. Since Obalon is gas-filled, the balloons are light and float to the top of the stomach with no pressure on the pancreas (as it is the case with liquid-filled balloons).

The Obalon Intragastric Balloon system is intended for temporary use to facilitate weight loss in adults over 22 years old with a BMI of 30 – 40 who have failed to lose weight with other weight loss methods.

Patients can lose up to 50% of their excess weight or 10% of their weight. An average of 89% of the weight loss is reported to be kept off 6 months after removal. Professional nutrition and exercise support are needed during treatment for successful weight loss.

There are over 10,000 patients who have received the Obalon balloon system with 0.3% incidence of serious adverse device events. Abdominal pain and nausea typically resolved in 1 to 2 weeks. The gastric ulcers reported in 0.9% of individuals with 3% cases of early removal.

Gastric irritating medicines, aspirin, anti-inflammatory agents (such as Advil or Motrin) cannot be taken while the balloons are in your stomach. You cannot live at an altitude more than 4000 feet higher or 2500 feet lower than the location where balloons were placed In your stomach.

The cost of the Obalon balloon system package is around 6,000 to 9,000 USD depending on the geographic location and the physician. The package includes the insertion of 3 balloons, nutrition support, and removal. Insurance is not covering this procedure at this time.

1 Comment on What is the Obalon Intragastric Balloon System?Posted in Obesity Reporter Blog By Editor in ChiefPosted on November 7, 2017September 2, 2020

One thought on “What is the Obalon Intragastric Balloon System?”