Obesity is defined as an individual having a body mass index (BMI) of 30 or greater. The United States population is plagued by obesity, with over one-third of the adults being considered obese. This 34.9% of adults don’t include the 17% of youth that are obese within the country, according to the Center for Disease Control and Prevention (CDC).

Although these numbers have not increased dramatically since 2010, they have also not decreased. The country failed to meet the goal of reducing obesity to 15%. There is little surprise that weight loss surgery is on the rise in the United States.

A new Gallup survey published on Friday shows that the obesity rate among adults surged in 2015 to a new high of 28 percent, or a 2.5 percentage point increase since 2008. That means the ranks of dangerously overweight Americans increased by 6.1 million adults over that seven-year period. Obesity is fast becoming the top health threat in this country. It consumes hundreds of billions of dollars annually to treat related chronic conditions, including diabetes, hypertension, heart disease, declining productivity, and depressed wages dues to lost time at work (source).

Obesity is Not Fair

Obesity is not equal among everyone. For example, those with lower income and less education are more likely to experience being overweight. Here are the factors involved,

There is no statistical data to illuminate the reasoning behind the numbers and differences in obesity over the ethnicities. The differences may come from a culture and the approach toward food, health, or exercise.

This clearly shows a large problem with obesity throughout the ages in the United States, particularly for adults in their middle ages. The reason for these differences is unclear. It may be due to upbringing for specific ages or the impact that society has had on specific age groups regarding food and exercise. 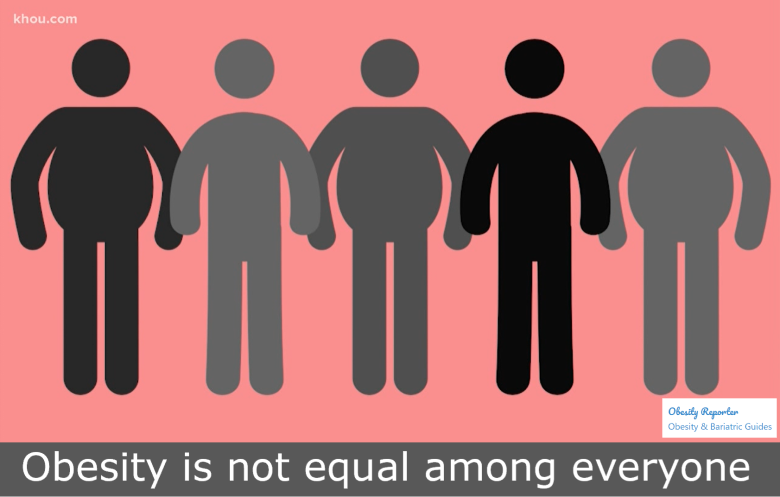 The differences do not end with age but also seem to be influenced by adults’ socioeconomic status. Non-Hispanic black and Mexican-American men, seem to be more likely to face obesity than an individual with lower incomes.

Education may also have some significance for women and obesity. Women with lower education levels seem to be more likely to be obese than those with college degrees. Men do not seem to be affected based on their education the way that women are.

Out of these numbers, most obese adults are men and women who are non-Hispanic white individuals with household incomes of 130% of the US poverty level. This huge number of obese individuals translates to a great deal of health and financial plight for the country.

Interestingly enough, location within the United States seems to have some significance as it relates to obesity. Adults that live in the Midwest came in with an obesity rate of 29.5%, while those in the South came in at 29.4%. The residence of the Northeast part of the country came in at 25.3%, while those in the West came through with 25.1% obese.

Obesity is more than a health problem for those in the United States. It is fast becoming a financial problem, as well. According to the CDC, the average annual medical cost for handling obesity and obesity-related comorbidities was $147 billion in 2008.

This means that the medical costs for those facing obesity were higher than those with a normal weight of $1,429. Some of these costs are passed on to the United States, and a great deal of it is carried by the insurance companies for the individual.

Some of the obesity-related conditions, also referred to as comorbidities, including stroke, heart disease, type 2 diabetes, and certain types of cancer. Individuals that are obese tend to have a weaker immune system and are more susceptible to illness. These individuals often find it hard to exercise because of the inability to find the flexibility necessary to do the work. Some individuals that are obese will spend a great deal of time missing work, and in morbidly obese individuals, work may not be an option due to mobility issues.

Statistically speaking, the increase in obesity is something that has not been gradual. While the United States is not alone in the fight against obesity, it does have a large problem at hand. The many conditions that can come from obesity have government branches such as the Chronic Disease Prevention and Health Promotion department of the CDC working to find solutions to the obesity. Over 75% of health care money is designated for the treatment of diseases, much of which is due to obesity-related conditions.

A new study in The Lancet says that if current trends continue, 18% of men and 21% of women will be obese by 2025. In four decades, global obesity has more than tripled among men and doubled among women, the study says (source).

Why Only 2.7% of US Adults Display 4 Healthy Lifestyle Characteristics

Only 2.7 percent of the US adult population achieves all four of some basic behavioral characteristics that researchers say would constitute a ‘healthy lifestyle’ and help protect against cardiovascular disease, a recent study concluded.

In this study, researchers from Oregon State University and the University of Mississippi examined how many adults succeed in four general barometers that could help define healthy behavior: a good diet, moderate exercise, a recommended body fat percentage, and a non-smoker. It’s the basic health advice, in other words, that doctors often give to millions of patients all over the world—source: Science Daily.