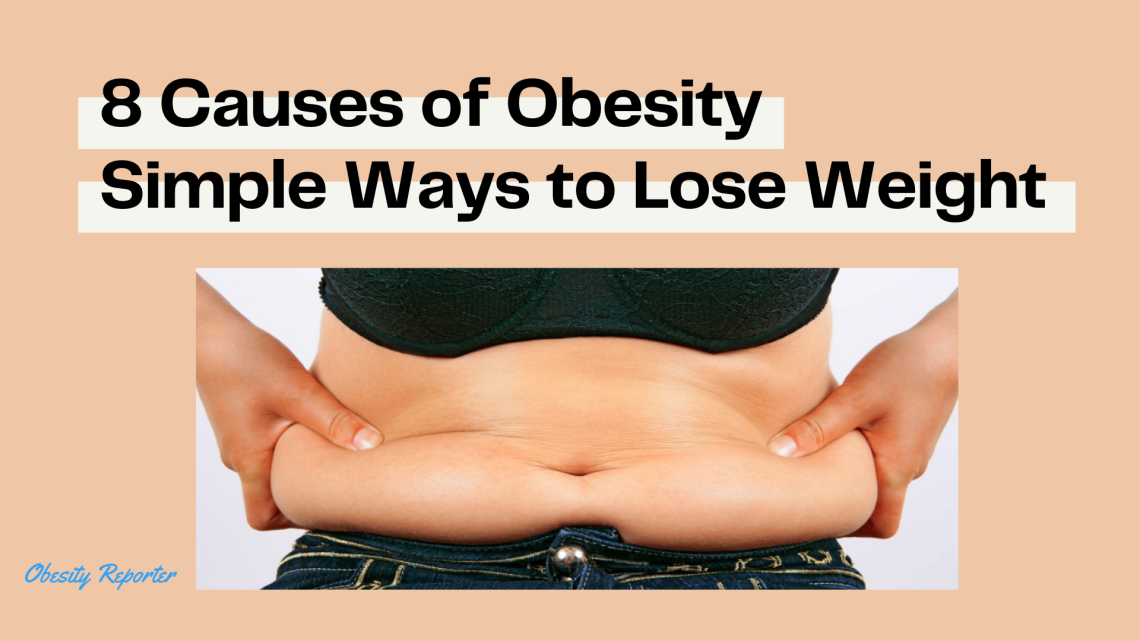 Now that it is established that obesity is a major risk factor for Coronavirus, the world is starting to see how detrimental extra weight truly is. On average, 1 in 5 deaths is attributed to obesity and the related health conditions associated with being overweight.

Obesity is a condition characterized by the excessive accumulation and storage of fat in the body. It has been linked to several health risks, such as diabetes and heart diseases. Obesity is different from being overweight, which is determined by Body Mass Index. The weight may come from muscle, bone, fat, and/or body water. Both terms (obesity and overweight) mean that a person’s weight is greater than what’s considered healthy for his/her height.

A surrogate marker for body fat content is the body mass index (BMI). BMI is calculated as;

Cause #1 – Excessive Intake of Calories

Obesity occurs over time when you eat more calories than you use. The balance between calories-in and calories-out differs for each person. The average man that is physically active needs roughly 2,500 calories every day to maintain a healthy weight. The average woman needs roughly 2,000 calories every day. The body stores excess calories as body fat, and over time the extra pounds add up. Eat fewer calories than the body burns, weight goes down.

Obesity definitely runs in families. Your genes may affect the amount of body fat you store and where that fat is distributed. There is a greater chance of being obese if one or more parents are obese. Genetics affects hormones involved in fat regulation.

For example, one genetic cause of obesity is congenital leptin deficiency caused by mutations in the leptin gene. Leptin is produced in fat cells and also in the placenta. Leptin controls weight by signaling the brain to eat less when body fat stores are too high. If the body cannot produce enough leptin or the leptin receptor becomes insensitive to the hormone (caused by a mutation of the receptor), feeding regulation is lost, and obesity occurs. The role of leptin replacement as a treatment for obesity is currently being explored.

Aside from congenital leptin deficiency and the leptin receptor’s insensitivity to leptin, one other monogenic cause of obesity is the mutations of MCR-4. All these monogenic forms of obesity account for only a very small percentage of obesity. It is likely that many gene variations interact with environmental factors to influence the amount and distribution of body fat.

Lack of activity, physical activity or exercise, is another important component that causes obesity. If you’re not very active, you don’t burn as many calories. With a sedentary lifestyle, you can easily take in more calories every day than you burn through exercise and routine daily activities.

About 25-30 percent of the energy used each day by the average person goes into the muscular activity. A laborer or an athlete, for instance, may use as much as 60-70 percent in this way. In obese people, an increased physical activity usually increases energy expenditure more than food intake, resulting in significant weight loss.

It is recommended for adults to spend 2-3 hours on aerobic activity or physical exercise every week. This includes riding a bike, walking, or running. This doesn’t need to be done all in one go but can be broken down into smaller periods. For example, you could exercise for 30 minutes a day for 5 days a week. If you are obese or overweight and trying to lose weight, additional exercise may be needed. Always start slow and build up as you feel comfortable.

Overeating leads to weight gain, especially if the diet is high in fat or sugars (for example, fast food, fried food, and sweets) have a high energy density (foods with many calories in a small amount of food). Studies have shown that diets high in fat contribute to weight gain.

Cause #5 – The Role of Carbohydrates

You may find it surprising to know that carbohydrate contributes in some way to weight gain. The end product of carbohydrate digestion is glucose. When there is an increase in blood glucose level, the pancreas is stimulated to release insulin, and insulin promotes fat tissue growth and can cause weight gain.

Psychological factors may contribute to obesity in some people. For example, people often gain a large amount of weight during or after stressful situations, such as a parent’s death, a severe illness, or even mental depression. It seems that overeating can be a means of relieving stress.

One factor that may contribute to being obese is the prevalent idea that healthy eating habits require three meals a day and that each meal must be filling. Many young children are forced into this habit by overly solicitous parents, and the children continue to practice it throughout life. The rate of formation of new fat cells is especially rapid in the first few years of life, and the greater the rate of fat storage, the greater the number of fat cells.

The number of fat cells in obese children is often as much as three times that in normal children. Therefore, it has been suggested that overnutrition of children – especially in infancy and, to a lesser extent, during the later years of childhood – can lead to a lifetime of obesity.

Some neurogenic abnormalities can cause obesity. An example is a hypophyseal tumor that encroaches on the hypothalamus. Another abnormality is a lesion in the ventromedial nuclei of

the hypothalamus. Experimental damage to the area of the hypothalamus triggers non-stop eating and weight gain in rats used for research. Even in the face of severe caloric restriction, animals with lesions in the ventromedial nuclei continue to gain weight because their metabolism is geared towards energy storage instead of energy burning.

Prior to the development of severe obesity, it has been shown the VMH-damaged rats (VMH = ventromedial hypothalamus) manifest increased insulin levels (which converts blood sugar into storage as fat). However, investigators have also found that cutting the vagus nerve in rats prevents hyperphagia, insulin rise, and weight gain. This has led to a proposal that the ventromedial hypothalamus may control energy balance by influencing insulin secretion through the vagus nerve.

Although the hypothalamic damage is almost never found in obese people, it is possible that the physiology of the hypothalamus or other neurogenic feeding centers in obese individuals is different from that in persons who are not obese. Abnormalities may also present themselves in neurotransmitters or receptor mechanisms in the neural pathways that control feeding. In support of this theory, an obese person who has reduced to normal weight by strict dietary measures usually develops intense hunger, one that is very rare or uncommon in a normal person.

This phenomenon indicates that the “set point” of an obese person’s feeding control system is at a much higher nutrient storage level than that of a non-obese person.